Came about through a form being filled in and signed by his mum.  The normal way for this to happen is to have mum or dad fill in the form within the first 5 years of the kids life and then you don't need ministerial approval.

Tony Abbott was 23 at the time and from everyone I have spoken to at the Department of Immigration once a child becomes an adult the adult child must fill in their own forms.

Tony's mum did it for him. 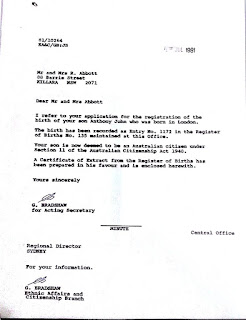 I tried emailing Mr Dutton as the minister to find out if mummy filling in the form was legitimate.  I waited 3 or 4 months and nothing so I lodged an FOI to find out what was legal.  After 7 months the Information Ombudsman go the department to respond to the FOI.  It was roughly a hundred blank pages.  After the first 3 months waiting for a reply to the FOI I lodged a petition in the 44th parliament.   It was ignored and hidden by the Petitions Committee and marked not to be referred.

At the start of the 45th Parliament I lodged pretty much the same petition again and it was read into Parliament and put in Hansard on 10th of October 2016. 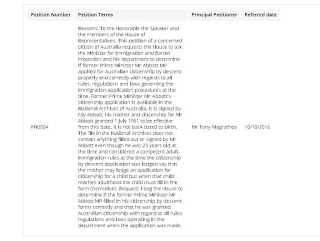 Me Dutton replied to that petition in December 2016 but the email must have got lost int he interweb.  I didn't find out until well into 2017 that there was a reply, and after reading it I can figure out why no one wanted it seen.  Mr Dutton hadn't bothered reading the petition and didn't bother answering it.  This is what he sent as a reply:- 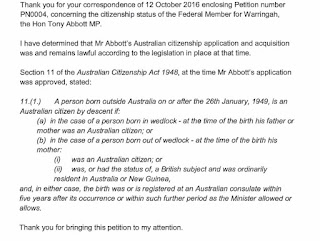 So we start again.

Petition EN0154 is now on the petitions list waiting for signatures.  It should be closed for signatures about 21 April 2017.  The link is where you can sign if you want to.  One signature is enough to have petitions put to parliament so no real drama there. 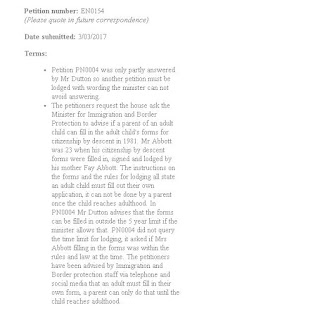 So there we have it.  A fiasco of years.  Fingers crossed but not holding my breath. 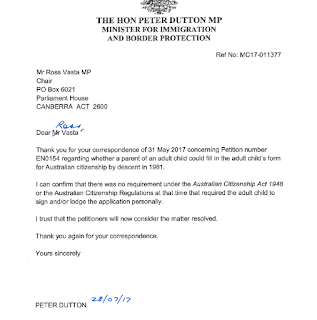 Done, dusted, all over red rover

Thank you to those who have PayPal'd me, much appreciated.  Being PayPal I can't thank you personally because your personal details are kept private.

Members of parliament don't reply to voters on email, snail mail,.twitter or farcebook.

Members of the media don't listen to viewers or listeners or readers.

So what's a voter to do?  Whinge and moan and cry on social media/  social media is basically a whinge bucket for politicians, everyone can whinge and they don't seem to bother replying.


FOI - try the right to know people and ask your MP's department to let you know what you want to know.


Or lodge a petition in parliament.  It can be written in the old fashioned way and posted in or done online with the new fangled e-petitions thingy.  Doc Jensen was basically a dual national waste of space in parliament and was arseholed quite significantly by his own party come election time in 2016.  But he did bring in the e-petitions when he was chair of the House of Representatives Petitions Committee. You need one signature to make n effective petition to parliament and it must be limited to 250 words to stop rants and must be something the House of Representatives can do.

Most MPs don't reply to me so I do write petitions and FOIs.

Here is one about Malcolm Turnbull in a roundabout way.  It asks the House of Representatives to determine if an MP can legally purchase the rights of Cayman Island citizens and get zero taxation.

I have asked barristers and been told that purchasing the rights and privileges of a foreign national is in breach of S44 of the constitution.

The part of S44 that makes Caymans accounts illegal for MPs  says a person who is entitled to the rights or privileges of a subject or a citizen of a foreign power is disqualified from parliament.

So time to sign and pass around petition number EN0130.  It can be signed here until about the 3rd of April. 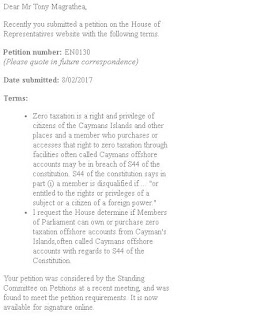 Thank you to those who have PayPal'd me, much appreciated.  Being PayPal I can't thank you personally because your personal details are kept private.