I am now banned from Twitter for life because I dared call someone trying to say franking credits for the rich, a rich bitch.


is called Ela Straw.  She did the whinging and whining to Twitter that got me arseholed.  She said being called a rich bitch is bullying and hate speech.  The tweet that got me kicked out is

Stranger still is her Twitter profile where the hatred is very directly aimed at me. 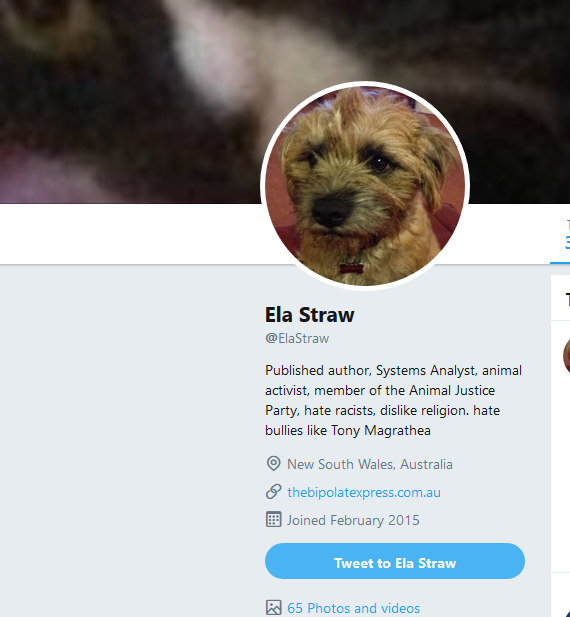 Silly Ela tries to proclaim she is a lefty in all her unnatural ways but has no idea what the consequences were of her stupid actions.  Now that I have been removed form Twitter gone too is all the history of the discussions and actions against illegal Members of Parliament who lied on their nomination forms to be elected.  I was sort of involved with the S44 fun and games from late 2013 when I first dared ask Tony Abbott, then Prime Minister of Australia, about his British citizenship.  I was labelled birther by most of the so called journalists at The Guardian Australia.  I was blocked from any of their discussions as were those who agreed with me.  It isn't like we were just a few nutters, though we probably qualify individually, tweets that were sent in those first years hit 600,000 people in minutes.

From those first few questions came the removal of a lot of Members of Parliament and the hiding of government members by numbers in the House. Scott Ludlam went even though he blocked me when I dared ask.  Larissa Waters refused to answer until 2 years after I first asked and she said all was OK.  Then she re-examined things and quit parliament because it wasn't OK.  Barnaby Joyce was gone, Fiona Nash, Malcolm Roberts and 5 in one hit when the labour party decided that maybe we S44 activists might be right.  Senator Gallagher was the catalyst for that.  Not so sure she likes me.

With Malcolm Roberts I was named in the High Court chronology for daring to ask his wife to make sure he was legal. Mal blocked me and refused to answer emails.  I lodged a Common Informers (Parliamentary Disqualifications) Act proceeding against him and he agreed to pay.  18 months ago he agreed to pay but I guess he cant find his cheque book? Still waiting Mal.


Asking about the dual citizenship part of the Constitution also brought up the momentary parts of S44 which has tied up a few other MPs that haven't been put to the High Court because of them being on the Liberal side of things and the Liberals running the hen house.  A Wiki does it all some service.

One of my other blogs lists the reports of Commonwealth Crimes lodged with the Australian Federal Police and details a petition lodged with parliament to find out who is really responsible for prosecuting the crime of signing a false declaration to nominate for election. The answer to that petition is here and is ignored by the AFP, the Electoral Commission, the Commonwealth Director of Public Prosecutions and the Attorney General who actually answered the petition.

Goodonya Ela for getting rid of all of that information on Twitter, and to Jack Dorsey is that what you really want to become? The man who rewrites Australian history to protect criminal members of parliament?

Some Members of Parliament waiting to visit the High Court are Josh Frydenberg, he has a similar Jewish ancestry to Tim Hollo who will be a candidate at the next election.  Tim bothered, Josh cried holocaust protects him. But Josh also has Polish ancestry.  Jason Falinski is another with Polish ancestry.

Tim Hollo investigated his citizenships thoroughly and brought up the other one that isn't dared mentioned - all Jewish people have the right to Israeli citizenship and part of  S44 says or is a subject or a citizen or entitled to the rights or privileges of a subject or a citizen of a foreign power they are disqualified from being in parliament.  Have a read of Tim's story - a true Aussie in the way that Aussies are nowadays. everyone from everywhere is here and accepted as one of us.

Dr. Gillespie is another problem, he was taken to the High Court under the Common Informers (Parliamentary Disqualification) act but that procedure was put on hold by the High Court judges until parliament questioned Dr. Gillespie under S47 and S44 of the constitution.  His Liberal protectors haven't bothered yet.  The ruling says:-


Almost forgot our wonderful fascist Peter Dutton. He is the Minister responsible for the Australian Federal Police and funnily enough they refuse to contemplate looking at a Commonwealth Crimes report regarding his money problems under S44 and the signing a false declaration to nominate for election. 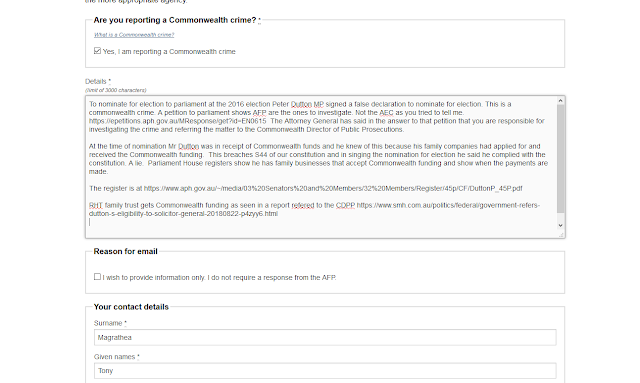 Barnaby Joyce was knocked back by the CDPP even though they have everything they need to prosecute him from their part in his S44 illegality.