Parliament is in chaos, thankfully Game of Thrones has told us chaos is a ladder, but not everyone can climb it.

I asked Abbott about his citizenship, for that I was ridiculed, called a birther, had death threats and the AFP parked up the street for 3 months watching my comings and goings from my own house.  I didn't just ask Aussie Tone, I asked every foreign born MP and so few bothered replying.

Others asked, 400,000 on Facebook became very vociferous with the key board asking about Tony Abbott.  Change dot org had a petition with 33,000 petitioners signing it.

I even discovered the wonders of petitions to parliament, I asked about Abbott and was told that we voters should trust MPs to tell the truth when they nominate.  I asked for an audit of citizenship for MPs and Senator Cormann couldn't be bothered answering the petition.  3 petitions in about 10 years have not been answered by ministers, the audit one, one asking about Abbott's mum signing his citizenship application and another that the petitions committee talk about but I cant find.

Senator Ryan as the new Special Minster of State ignored a submission to the inquiry into the 2016 election asking for amongst other things  an audit of citizenship compliance and for Senator Roberts to be checked for compliance.  Senator Ryan didn't bother so the chaos kicked in properly when Senator Ludlam & Waters who I had asked in 2014 both quit for being dual citizens.  And then the Village Idiot Roberts declared he would go to the High Court to determine if he was a dual citizen or not.

Senator Ryan is off sick, I believe it is stress after a recent medical procedure and may be compounded by incompetence and the chaos in parliament, but surely it sits with Senator Cormann who refused to answer a petition.  Just ignored it.  Who was he protecting? How many others will go?

The bastard birther has put another petition to parliament and this time the Attorney General must answer it. 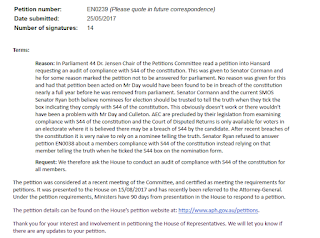 And on telly while I am writing this Billy Bhoy Shorten the Abbott apologist has decided that there shouldn't be an audit because it is up to the individual. This wannabee next Prime Minister was the first person in the country to block me on social media for daring to ask him to ask about Abbott's citizenship.  It took Ludlam & Waters and a UK court case to finally determine Abbott has renounced his British citizenship, but he should have answered when asked back in 2013.


We need an audit of all MPs because the option is to trust MPs to tell the truth when they nominate.  And that hasn't worked at all so far.  The petition is there, the audit must happen and everyone must show they comply with the law.

It doesn't stop there. Legislation needs to be changed to allow the Australian Electoral Commission to demand proof of compliance at nomination instead of waiting for disasters in parliament.

Access to the Court of Disputed Returns must be made available to any voter in the country, not just limited to the voters in a particular electorate.  The time limit for CODR must also be changed so that the court can be accessed by voters at anytime instead of just withing 40 days of the election being called.


Thank you to those who have PayPal'd me, much appreciated.  Being PayPal I can't thank you personally because your personal details are kept private.  Very much appreciated to have the support, in gifts or words, from so many people over the past few years.