Submissions to the JSCEM 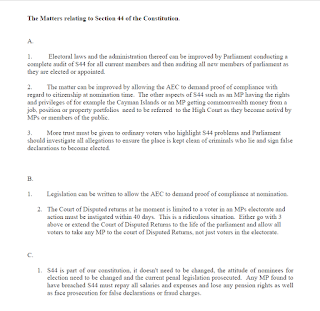 The other waiting to be accepted.  It will end up in this link and click on the submissions on the RHS when it comes up.


The implications of recent decisions by the Court of Disputed Returns concerning section 44 of the Constitution on questions referred by the Parliament under section 376 of the Commonwealth Electoral Act 1918, with particular reference to:


(a) the decisions in connection with the disqualification of former Senators Bob Day and Rodney Culleton;
(b) a regime for disclosing information relating to aspects other than section 44(i), for which the Parliament has already provided;
(c) the form such a process might take and how it could be implemented; and
(d) any related matters.

As a voter my biggest concerns are the former members of parliament not having to repay their salaries and expenses and avoiding any investigation into signing false declarations to nominate for election.

(a) Both former Senators Day and Culleton were aware of the problems highlighted in their High Court cases before signing the nomination form to be elected. Both signed false declarations but any option to have that investigated by the Australian Federal Police has been covered up.

(b) The various parliamentary committees which call for public submission must investigate all problems highlighted in those submissions. In the JSCEM inquiry into the 2016 election I pointed out several problems regarding S44, Senator Roberts citizenship, Mr Turnbull buying the rights and privileges of Caymans Island citizen with his Caymans Island accounts and the continuing problems with Mr Abbott where it now transpires the UK Home Office refuse to confirm the details in his renunciation letter shown to parliament match data held in the Home Office.
(c) The best way to handle S44 problems would be to have an independent public service office examine all reports and allegations of problems mentioned in the media. In parliament or by voters writing to the office. The pubic service office would have the authority to demand proof from MPs and should the matter not be resolved to refer the MP to the High Court. The Office should be independent and not have any political association at all. As a voter I am very concerned that both the Liberal and Labour parties seem to have an unwritten code to not refer the others members to the High Court. To have a situation where criminality can only be investigated because a party has the numbers in the house or the senate is ridiculous. An MP either signed a false declaration to nominate or later situations changed to put them in breach of S44 or they are innocent.

(d) Should the public service office mentioned above be instituted then a complete audit of every MP must be undertaken. Then the AEC must be allowed to demand citizenship proof at nomination time. At the 2016 election a senate candidate in Tasmania was a dual citizen and a candidate in the seat of Warringah, other than Mr Abbott, was a dual citizen or not in fact an Australian citizen, he wasn't sure according to his blog.

Posted by Tony Magrathea at 00:19 No comments: