Yes I am the pain in the bum who is trying to get Tony Abbott into the High Court.

In my travels through the public services, politicians offices and laws of this country I have become familiar with a bit of what's going on that the normal voter does not know.

This year the Australian Electoral Commission brought out a slightly different Form 60, that's the group of forms that candidates or their representatives sign when they nominate to run for election.

This year there is an added tick box asking if the candidate complies with S44 of the constitution. 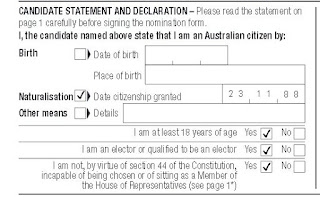 This is where the problems start.

The Australian Electoral Commission is there because of the Commonwealth Electoral Act 1918 a letter from Paul Pirani, the chief legal officer of the AEC said:-

The Form 60 seems to be invalidated by asking about S44 of the constitution.

Senator Cormann has refused to answer my emails asking him to write a ministerial directive to allow the AEC to monitor and prosecute breaches of S44 of the constitution.  Similarly Mr Brough and Senator Robinson refused to reply to me.

Will a losing candidate read my blog and decide to challenge the election in the High Court so they can try and run again?   Or will Senator Cormann try to write a retrospective Ministerial Directive to allow the AEC to monitor and prosecute breaches of  the constitution in conjunction with the Attorney General?

Has the whole election been invalidated by that one tick box on the Form 60?  I couldn't face another 8 weeks of the bullshit and lies.

So there you have it, another blog in a quite long series.  If you want to encourage an opinionated bastard click the link to donate. If not, goodonya for reading.