Postscript to The End is Nigh

The one before this, The End is Nigh discusses a letter Mr Abbott posted on twitter purporting to be proof of his renouncing his British citizenship.

On the day he posted that letter on twitter I lodged an FOI request at the UK Home Office asking for a copy of the form RN and the receipt he paid to renounce his British citizenship.  This was to tidy up the saga and add them to everything I had on my searching for the truth.  The link to the request is here.

Ten days later I got a reply saying

I can confirm that the Home Office does not hold this information.


All can be found in the link above or read the screen cap below. 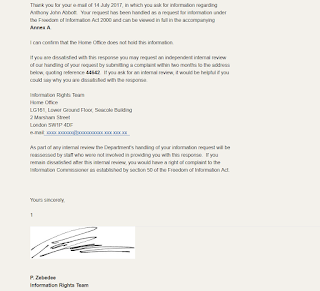 Zebedee and the Magic Roundabout sort of fits in nicely with this whole fiasco of Tony Abbott's citizenship.  What is Senator Ryan doing? He is the Special Minister of State responsible for all things election.  An audit of S44 compliance must happen quickly and the Australian Electoral Commission must be allowed to demand proof at nomination time.

For a year or two there have been appeal processes going on in the UK because the UK Home Office refused to release information about Mr Abbott's compliance with the Australian constitution.  The matter went through an internal appeal, an Information Commissioner appeal and for a long while the First Tier Tribunal, a judges only court process to determine once and for all what is what.  I sent a copy of that dodgy Abbott twitter letter and for nearly three weeks we in the court process, the ICO, the Tribunal and myself have been waiting for the UK Home Office to determine if the letter is factual.  It is.  I received this reply from the Tribunal today (2/8/17)

There is no confirmation from the UL Home Office that the information  in Mr Abbott's photo shopped letter is correct.

The FOI request and refusal to answer process is in this

I asked the UK Office of the Information Commissioner to examine the case and they have ordered the UK Home Office to answer  by 25 January. 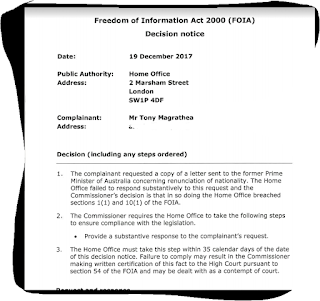 The end is nigh

Tony Abbott posted this in his twitter feed yesterday after Senator Ludlam announced he was a dual citizen and resigning from parliament.   Former Prime Minister Paul Keating was also on twitter calling for an audit of S44 compliance after Mr Ludlam's resignation announcement and he coyly included Mr Abbott's twitter tag.  Senator Hinch did the same.  A few minutes after Mr Ludlam's announcement I emailed my local MP Andrew Wallace asking if he would push for an audit of S44 and mentioned how things were going in the court case in the UK which is demanding the UK Home Office release information about Abbott. An hour after my email to Wallace Abbott releases the information.  Me or Keating or Hinch or guilt LOL  It's all about me init? 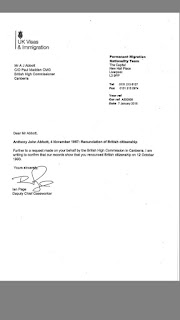 The UK Court people were sent a copy of the letter Abbott posted on twitter and told if this matches the information the UK Home Office refuses to confirm or deny, then cancel the court process.

Would have been much better had Senator Cormann had answered a hidden petition asking for an audit of S44 compliance.

An audit of S44 compliance was also asked for in submission to the Joint Select Committee on Electoral Matters just after the 2016 election.  That submission has been ignored by Senator Ryan but maybe now he will look at the audit and allow the Australian Electoral Commission to ask questions about S44, query compliance with S44 and prosecute breaches of S44.

All over red rover.

As a PS it really is an embarrassment that 3 of our elected officials are removed from parliament because they couldn't be bothered checking if they comply with our constitution, even more so that Senators Ryan and Cormann think we the voters should just trust them to tell the truth.

Thank you to those who have PayPal'd me, much appreciated.  Being PayPal I can't thank you personally because your personal details are kept private.  Very much appreciated to have the support, in gifts or words, from so many people over the past long time.  There's that number 44, started in the 44th parliament about section 44 and the other section 44 in the Crimes Act may  be just what convinces parliamentarians to do the legal thing.  Almost forgot the spill vote, Turnbull 54 Abbott 44.  Lucky numbers anyone?