And that’s about all we know about his citizenship.

There is a shipping list showing him and his parents leaving Bombay for the UK in April 1956.  His citizenship is listed as UK (Aus) so figure that one out. 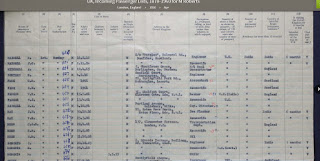 This is what I got from the High Commission

And this from the Canberra Births Deaths and Marriages

So I wrote to the Department of Immigration and Border Farce to lodge an FOI to find out if they have anything about his Australian citizenship application.
They wrote back saying they don’t have the file it is with the National Archives of Australia.

Shock of shocks I had checked with the NAA before lodging the FOI with Immigration.  I sort of know what is what by now.

National Archives of Australia show nothing for Malcolm Ieuan Roberts, no records at all.
So what are you Malbob?  No record of your Australian citizenship and you refuse to answer any emails or letters I send you as my Queensland Senator.  You were born Indian but no record of you becoming Australian.
Would you care to enlighten us or wait for the Joint Select Committee on Electoral Matters to decide things for you?

Wouldn’t it be cute if you and Culleton both go missing because of S44 of the constitution.

Now the public shaming of myself, the bit at the bottom of my blogs asking for you to Paypal me.